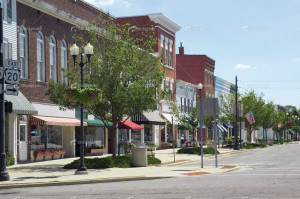 Galesburg is a unique town in that it was a planned city whose purpose was fostering religious education. Knox College was the main reason for its existence. The college was granted a charter by the Illinois State Legislature in 1837, but it was not until 1841 that it opened its doors to the first freshman class. Old Main was completed in 1851 and has the distinction of being the only building still standing where a Lincoln-Douglas debate was held, the fifth and most famous of the debates.

It has historical ties to the railroad, too, with the Chicago, Burlington, and Quincy Railroad (CB&Q) coming to the City in 1854. Funding for the linking of the CB&Q Railroad came from a Galesburg investor, beginning a rail history that still lives today. The CB&Q later merged with other railroads to form what is now Burlington Northern Santa Fe Railroad. Galesburg still prides itself in its railroad history, with several museums and a festival devoted solely to the railroad.

During more than 150 years, Galesburg has grown and prospered through wise business and civic leadership. Today, the city offers plentiful housing, excellent schools and colleges, and a solid economic base that has attracted national corporations and a productive, reliable labor force.